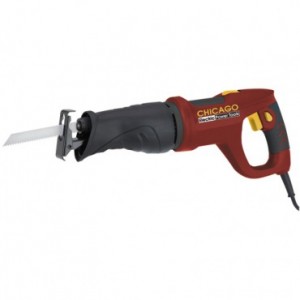 I bought a 6 amp Chicago Sawzall from Harbor Freight. The reciprocating saw cost about twenty five dollars. In review of my most recent kitchen cabinet remodel jobs that I have used the sawzall on, I have no complaints about this tool.

Renovating an Old Oven Cabinet
I recently used the reciprocating saw on an old single oven cabinet that was fabricated out of three quarters inch thick ply-wood and pine. It was a Formica kitchen cabinet. The saw worked great for cutting out the existing shelves and for cutting the face frame of the cupboard.


Feature Review
One of the nicest features of this Sawzall is the chuck mechanism that holds the blade in position. It makes changing blades really easy. When I purchased the saw from Harbor Freight, I also bought TPI Milwaukee blades.

Cutting Off a Pass-through Countertop Sub-top
We were renovating a kitchen where there was a very large pass-through sliding glass window. I used the Chicago reciprocating saw to cut a long piece of medium density fiber board off that was three quarters of an inch thick. I had to cut an eight foot length. I used a regular skill saw in combination with the reciprocating sawzall and the power tool performed nicely again.

Feature Review
The variable speed trigger works extremely smooth. It starts at a super slow RPM and gradually and smoothly gains to top speed as you pull the trigger.

I had vanity cabinet installation job where the contractor sent the medicine cabinets, the doors and the piano hinge separate. In other words, I had to assemble them on the job. The piano hinges had not been cut to length yet. I used the Chicago saw to cut them to the proper length.The Chicago sawzall had a metal cutting blade included in the box that worked great for the task.

For the money, the 6 Amp Chicago reciprocating saw from Harbor Freight is a real good tool.

Although I have only used it a couple of times, I can tell that it will handle any cabinet repair or remodel job that I will have to use it on. For an economically priced power tool it is well-balanced and has decent mass to it. It’s not a wimpy light weight piece of equipment.